Some links on this page may be affiliate links. If you click an affiliate link and make a purchase, we may receive a small commission, at no extra cost to you. For more details, refer to our disclosure. 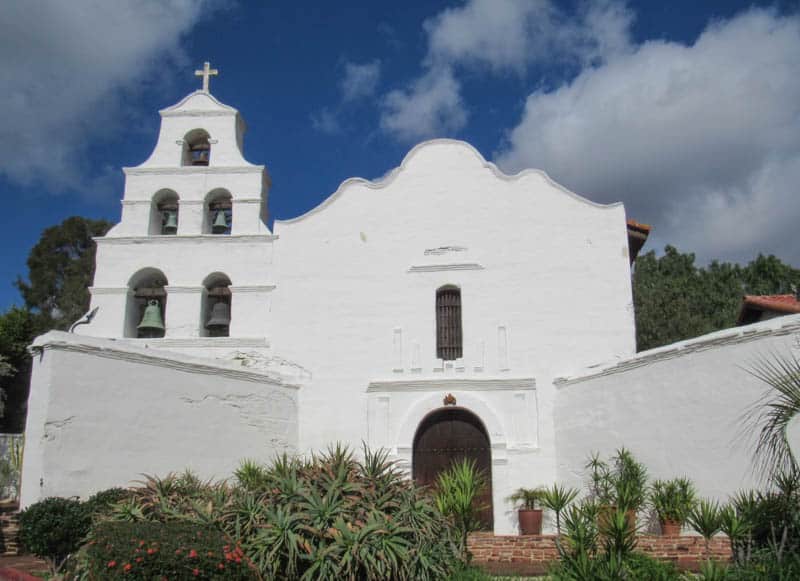 The San Diego Mission is the first of twenty-one missions built in Alta California by the Spanish. Mission San Diego de Alcala is worth visiting for its history, its architecture and bell tower, and its gardens.

Established in 1769 by Father Junipero Serra, a Franciscan friar, the San Diego Mission, and the missions that came after it, served to evangelize Native American peoples that lived in the area. The San Diego Mission was named for St. Didacus of Alcalá, a 15th century Franciscan missionary.

Today the mission functions as an active parish church, and you can tour the grounds and the museum. Nicknamed “Mother of the Missions,” the San Diego Mission is a National Historic Landmark and a California Historical Landmark.

If you enjoy local history and culture, and gardens, the mission is a must-visit in San Diego.

The Spaniards sent both soldiers and priests to help expand the Spanish Empire in the New World. In 1769, the soldiers, led by Gaspar de Portolá, built the Presidio of San Diego on what is now Presidio Hill.

The priests, led by Father Serra, established the mission, to serve the Spanish colonists, and to convert the local Kumeyaay people.

In 1774, the mission was moved a few miles from its original site, for better water supply for agricultural activity, and to establish some distance between the Spanish soldiers and the local people, with whom Father Serra was trying to build rapport.

In 1775, an uprising by the Kumeyaay people led to the burning of the church and other mission buildings. Father Luis Jayme, the resident priest, was killed in the uprising, and became the first Christian martyr in Alta California. He is buried at the mission.

Father Serra returned to San Diego to rebuild, and a building of adobe brick was constructed. The mission prospered, sustaining itself with agriculture and the breeding of cattle, sheep, and horses. Grapes were also planted, and the mission produced wine. Over time, the mission controlled more than 50,000 acres of land.

In the early part of the 19th century, the mission church was rebuilt again, and this is the church you see today.

In 1818, a sub-mission, or Asistencia, was established in Santa Ysabel, northeast of San Diego, but nothing remains of the original structure. A chapel was built at the site and dedicated in 1924.

Following the Mexican War of Independence, Mexico secularized all the Catholic missions in Alta California. With the Franciscan friars gone, the property deteriorated. Mission San Diego was gifted to Santiago Argüello as part of the rancho land grant program.

After the US took control of California, the San Diego Mission was used for some years as a military outpost. In 1862, President Abraham Lincoln returned the mission to the Catholic Church, albeit in ruins. The church restored it and used it as a school for a time.

In 1931, the task of restoring Mission San Diego de Alcala to its original glory was begun, and upon completion, the mission was dedicated as a parish church in 1941. In 1976, Pope Paul VI designated the church a minor basilica.

Architecture of the San Diego Mission

The San Diego Mission is a simple structure, made of adobe brick with whitewashed walls, with a clay tile roof. It is the oldest building in the State of California and one of the most beautiful of the California missions. After you park, pause a moment to take in its simple beauty before you step inside.

Although the present structure has been restored, it retains much of the design from the 1813 church. So what you see today is much like how it looked all those years ago. The windows of the church are set high in the walls, and the doors of the church are replicas of the originals.

Services are offered at the church every day. The long chapel contains an altar made of wood. Some of the tiles in the floor are from the 1813 church, and some of the statues are from the original mission.

The mission buildings were built around a square courtyard, with the church taking up one end, and other buildings, such as living quarters, storage areas, and a granary and blacksmith workshop set along the remaining sides.

The four-level bell wall, called the campanario, is one of the most beautiful parts of the San Diego Mission. It is 46 feet tall and topped by a wooden cross. The five mission bells are arranged in three rows.

The base of the bell tower is original, as are some of the lower walls of the church. The largest of the five bells is an 1894 casting of the original Mater Dolorosa bell, and weighs 1,200 pounds. The second largest bell is from 1802, and weighs 805 pounds. It has the Spanish crown at the top.

The museum at Mission San Diego is small, but it contains some interesting historical documents and artifacts. Named for Padre Luis Jayme, the museum holds statuary, vestments, and a replica of the proclamation issued by President Lincoln returning the mission to the church.

You can also see old agricultural implements, pottery, and photos that describe the history of the mission. To complete your look back into the past, also visit the Serra Museum on Presidio Hill, where exhibits related to Father Serra are housed.

There is also a gift shop and bookstore you can browse.

The garden at the San Diego Mission is serene and beautiful, even if small. It makes for a lovely stroll, with plantings of palm trees, roses, hibiscus, olives, avocados, citrus, succulents, and bougainvillea. Some of the trees and plants here are believed to be quite old.

Among the plantings, you will see statuary and memorial crosses made from original mission tiles. The crosses are memorials to the neophytes that died at the site. There is a statue of Father Junipero Serra in the garden, as well as a statue of Saint Joseph, the patron saint of the expedition to San Diego.

In the Pieta Garden, you can view a Pieta statue that looks like Michelangelo’s rendition, housed in Saint Peter’s in the Vatican. The Stations of the Cross art depicts the various stages of the death of Jesus.

The site is home to the oldest European cemetery in California. Also step into Saint Bernadine’s Chapel, if it is open when you visit. The interior is a mix of Spanish and Mexican, with some items several centuries old.

Getting to the San Diego Mission

Parking at the San Diego Mission

The mission is perched on top of a hillock, a bit of a climb from the street. There are parking spots along the street, and we parked in one of those spaces.

If you do not want to climb up to the entrance, go up the driveway and find a spot in the parking lot right by the entrance, which as accessible parking as well.

The church, museum, gift shop, and grounds and gardens are open from 9 a.m. to 4.45 p.m. Services are offered every day, with several Mass times on Sundays until noon.

Admission to the museum costs $3.00 for adults at the time of writing, with discounts for seniors, students, and children 11 and under. Mass is free. Check the Mission website prior to your visit for up-to-date information on hours and fees.

Guided tours are generally offered on week days, but check the Mission website for special situations where tours may be suspended. If you plan to do a self-guided tour, you may want to check at the bookstore for an audio accompaniment, which is very helpful in terms of offering context for what you are seeing.

Festival of the Bells

The Festival of the Bells is celebrated on the Sunday closest to July 16, the anniversary of the founding of the San Diego Mission. It is the only day of the year when all five bells of the mission ring in unison.

The festival includes several days of fiestas and other events featuring Spanish food, music, and dance, and traditions such as the Blessing of the Bells. It is a great time to visit!

Planning to visit San Diego? Check out our article on the Balboa Park Gardens, and tips for visiting Cabrillo National Monument!

And if you enjoy historical travel, you’ll want to check out our guide to all the 21 California missions!

Did you find this article informative? Pin it for later reference!

Dhara loves to explore her home state of California. With her husband Kishore, she has done numerous road trips in the state in every season. She hopes to share her love of the Golden State with you, and help you find your own exciting experiences here. 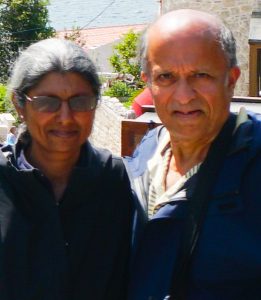 Hi! We are Dhara and Kishore. Through this blog, we hope to inspire you to roadtrip the beautiful state of California in search of unforgettable travel experiences.

Discover our articles on California towns and cities, national and state parks, beaches and other natural areas, and cultural and historic landmarks.

The Golden State is a world-renowned travel destination, and our articles will hopefully inspire you to explore it in depth.

As an Amazon associate, we earn from qualifying purchases.